In one of the Japanese cities Reizaus went into, he shot through a cloud of dust then he began to roar as people flee. We then see him head up to a building and using his super heated claw rips a building in two as people run from the falling rubble, and the scene ends. This is the only footage containing Reizaus.

Reizaus is a monster which appeared in cut footage of Godzilla: Final Wars. Rumors began to circulate that the monster in this scene is Bagan, however it is revealed that Bagan was not planned for Final Wars, and the footage was faked. The monster in this fake footage has now been called Reizaus.

Reizaus appeared in fake footage which was released in 2005 of what people thought was the creature Bagan, the giant creature that first appeared in the 1993 Godzilla game Super Godzilla. Bagan was scheduled to be in numerous Godzilla movies but all were scrapped.

The creature in the fake footage is actually called Reizaus and not Bagan like many fans thought. Toho said that Bagan was not going to be in Final Wars and the footage is fake. Reizaus is between 100-145 meters height and weights between 180,000-240,000 tons his crab claws can turn red and have enough strength to slice a building clean in half it is not known if Reizaus had a horn beam, but because he was never in the movie it is unknown if he had a special horn attack. 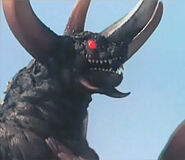 Retrieved from "https://kaijufanon.fandom.com/wiki/Reizaus?oldid=14665"
Community content is available under CC-BY-SA unless otherwise noted.