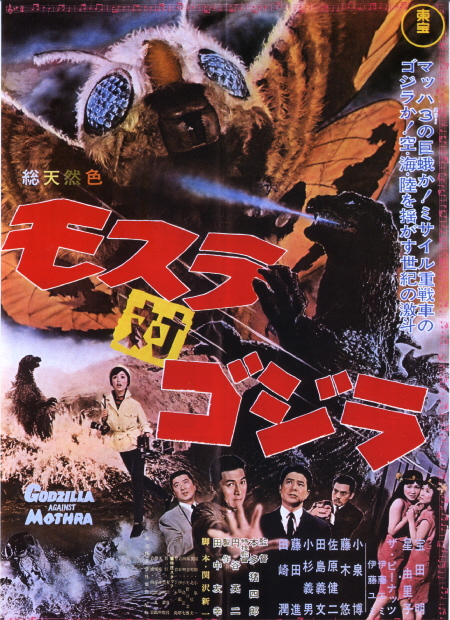 Mothra vs. Godzilla (Mosura tai Gojira) is the 4th Godzilla film, the 1st Godzilla film to feature Mothra and the larval form of Mothra. There are 2 Alternate titles: Godzilla vs. The Thing, and Godzilla Against Mothra. Fans mistakenly refer to the movie as Godzilla vs. Mothra, not to be confused with the 1992 film Godzilla vs. Mothra. The film was released in Japan in April 29th, 1964, and it was released in the USA in September 17th, 1964. The film (both Japanese and American versions) have a running time of 88 minutes (1 hr. 28 min.). The film was directed by Ishiro Honda, and produced by Tomoyuki Tanaka. The film was composed by Akira Ifukube. Eiji Tsuburaya was the Director of Special Effects.

News reporter Ichiro Sakai and photographer Junko Nakanishi take pictures of the wreckage caused by a typhoon. Later on that day a giant egg is discovered on the shore. The local villagers salvage it, and scientists come to study the egg.

While Sakai and Junko try to ask Professor Miura questions about the egg, an entrepreneur of Happy Enterprises named Kumayama scurries the scientists off and explains that he bought the egg from the local villagers. Instead of letting scientists study the egg, Kumayama wants to make it into a large tourist attraction. Sakai, Junko, and Professor Miura are disgusted and believe that Kumayama has no right to keep the egg.

While the three are discussing the egg at a hotel, they discover Kumayama checking in. Sakai wonders aloud if somebody else may be working with Kumayama and investigates the matter. Kumayama walks into Jiro Torahata's room, the head of Happy Enterprises. As the two are discussing the billion-dollar tourist attraction, two tiny twin girls, known as the Shobijin, interrupt them. The Shobijin explain that they are from Infant Island and that the egg belongs to their god Mothra who lives there. Torahata and Kumayama ignore the girls' pleas and try to capture them.

The Shobijin escape the room and meet with Sakai, Junko, and Professor Miura outside the hotel. The girls beg them to bring the egg back too and the three promise to try as hard as they can to bring the egg back to Infant Island. The girls explain that if the egg is not returned, a larva will hatch and will cause no mercy and destruction to its surroundings as it searches for food. Sakai tries to write editorials but they fail.

The girls soon leave and even though they could not get the egg back, they thanked Sakai, Junko, and Miura for their kindness. While the three are testing for radioactivity in an industrial area, the mutant dinosaur Godzilla suddenly emerges out of Kurada Beach, where he had been blown ashore by the storm and buried under mud, and begins to attack Nagoya.

The editor of Sakai's newspaper believes that the military cannot do anything against Godzilla and discusses it with Sakai and Junko. Jiro, another reporter who loves to eat eggs, walks in and suggests that Mothra might be able to defeat Godzilla. Sakai and Junko are skeptical that the Shobijin would not agree because atomic testing had destroyed most of their island, and they had failed to return the egg to them.

The two go to Infant Island anyway with Professor Miura. They are captured by the local villagers and are brought to the tribe’s chief. The three ask for assistance but, as expected, are turned down because of the atomic testing, and Japan's failure to return the egg.

The Shobijin are heard singing and everyone walks towards them. Sakai, Junko, and Miura ask the Shobijin for Mothra's assistance but they are also turned down. Junko then pleads to all the villagers that not everyone from Japan should be blamed for what happened to their island. Godzilla is killing everyone and refusing their country assistance Sakai then adds that "we're all human" and that everyone is connected and must help each other. Mothra's screech is soon heard and the Shobijin ask everyone to follow them. They convince Mothra to help Japan and the people that live in it, but the monstrous insect is weak. Even if Mothra defeats Godzilla, she will have no power left to return to Infant Island.

The next day, Kumayama barges into Torahata's room and demands Torahata to give him his money back that Torahata had recently swindled from Kumayama. They fight and eventually, Torahata is defeated. Kumayama crawls into Torahata's money cabinet and begins to steal the money from it. Torahata wakes up and sees Godzilla approaching the hotel. He then grabs a gun and shoots Kumayama in the head, killing him. Torahata is killed while escaping with his money when Godzilla destroys the hotel.

Godzilla walks towards the egg and tries to destroy it until Mothra shows up. The two fight a tough battle where Mothra seems to have the upper hand. While on the ground, Godzilla fires his atomic ray into Mothra's face and mortally injures her. Mothra dies with her wing resting on top of her egg. Godzilla walks away. The Shobijin then explain to Sakai, Junko, and Miura that the egg can be hatched today. The tiny twins soon begin to sing.

Meanwhile, the military tries to fight Godzilla by electrocuting him with "artificial lighting" but fail. Godzilla then melts the tanks with his atomic ray. The Shobijin continue singing and Mothra's egg finally hatches with not one, but two Mothra larvae. The larvae follow Godzilla to Iwa Island and use their cocoon spray on Godzilla to trap him, sending him into the sea. The Mothra larvae and the Shobijin celebrate and return to Infant Island.

The film received generally positive reviews and is one of the most respected Godzilla entries in the franchise. It is also notable for being the 1st film to feature Mothra, and the Mothra Larva. American critics disliked the fact that the film was called "Godzilla vs. The Thing", and left out Mothra. Eugene Archer was one such critic.

Retrieved from "https://kaijufanon.fandom.com/wiki/Mothra_vs._Godzilla?oldid=16541"
Community content is available under CC-BY-SA unless otherwise noted.