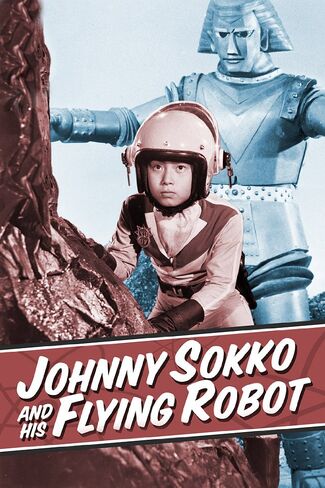 An adaptation of Mitsuteru Yokoyama's 1967 secret agent manga Giant Robo , Johnny Sokko and His Flying Robot is the Americanized version of the Japanese Toei tokusatsu television series Giant Robo. It followed the explots of Johnny Sokko (Daisaku Kusama in the Japanese version), a boy charged with the task of destroying an evil organization named The Gargoyle Gang ("Big Fire," in Japan) for which he's been given access to the titular flying robot. It originally aired in Japan from 1967 - 1968, but garnered more fans in syndication throughout the '70s.

It is notable for its interesting array of kaiju, ranging from fairly standard kaiju (Such as Dakolar/ Dracolon the sea monster, the dinosaur-like Lygon-Trox/Lagorian, the foreign Giant Robo clone Calamity/Cleopat and the towering war machine GR-2/Torozon) to outright bizzare monsters (such as Gansmon/Opticorn who served as the inspiration for Ultraman Tiga's Gan-Q kaiju, to Iron Power/Flying Jawbone and Gangar the iron claw who could crush his opponents with its giant fingers) and its campy acting and special effects and is equally notorious for its final episode which ended with Giant Robo sacrificing himself to stop the Gargoyle leader Emperor Guillotine from destroying the Earth,  and managed traumatizing an entire generation of both Japanese and American children

Earth has been attacked by an illuminati-esque galactic terrorist group called The Gargoyle Gang, which is lead by the alien Emperor Guillotine, who issues orders to his minions throughout the series from the safety of a space ship hidden at the bottom of what is presumably the Pacific Ocean.

To keep the terrorists at bay, a young boy named Johnny Sokko/Daisaku Kusama is tasked with taking control of an enormous flying robot. Along the way the Giant Robot must fight against the Gargoyle's giant monsters and super robots who are tasked to destroy Giant Robot. 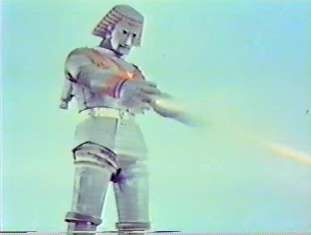 The Giant Robo/Flying Robot has numerous weapons systems which Daisaku/Johnny can command him to use. The robot is 30 meters tall, weighs 500 tons, and has a maximum flight speed of Mach 17. The weapons in the Giant Robot's arsenal include these:

In addition, the Flying Robot has the capability of the "Atomic Punch (1st episode)," "power punches," also later called "megaton punches" or "mega-punches" by Daisaku/Johnny himself; these consist of the Flying Robot throwing nearly all his mega-strength into a punch to whatever enemy he is facing off against in an episode.

Retrieved from "https://kaijufanon.fandom.com/wiki/Johnny_Sokko_and_His_Flying_Robot?oldid=26204"
Community content is available under CC-BY-SA unless otherwise noted.