The Megaguirus Godzilla has the same personality as the 1954 Godzilla and the other Godzillas, as he is extremely mad at humanity for awakening and irradiating him and also becomes aggressive when provoked or messed with. Also, he focuses on fighting other monsters.

Role in his film[edit | edit source]

Godzilla raids Tokyo in 1954. He later reappeared in Osaka as he battles the humans. Years later he returns. While he is in the sea, he battles some fighter jets. Then he approaches an island only to be attacked by Meganulas and battles the Meganulas. Than he gets buried by the Dimension Tide, but he survives and leaves the island and returns to the sea. Later he approaches modern day Tokyo, only to battle Megaguirus. The battle between Godzilla and Megaguirus ensues. Then Godzilla gained the upper hand and finally defeated Megaguirus. Later, Godzilla gets attracted to the plasma energy of A secret nuclear project housed at the Science Institute. Later, he gets buried once again by the Dimension Tide. The monster seemly vanishes, but moments after the credits of the film, Godzilla reawakens and roars. 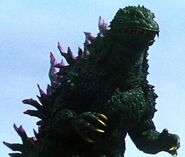 Retrieved from "https://kaijufanon.fandom.com/wiki/Godzilla_(Vs_Megaguirus)?oldid=43835"
Community content is available under CC-BY-SA unless otherwise noted.