Godzilla (MonsterVerse) is an incarnation of Godzilla that appeared in the 2014 Legendary Pictures reboot film, Godzilla, and its upcoming sequels. He is the main Kaiju protagonist in Godzilla (2014 Film), Godzilla: King of the Monsters, and Godzilla vs. Kong.

He is a giant prehistoric amphibious reptile with dorsal plates running down his back and a blackish and greenish gray scaly skin and big legs that look like legs of an elephant and amphibious reptilian arms and a slightly long tail.

Role In His Films[edit | edit source]

He was awakened in 1954 by a Russian Military accident. Throughout the mid-1950s, the United States and Russian Militaries used nuclear weapons in attempts to kill Godzilla and cover them up as nuclear tests; thus his existence is unknown to the public. However, he survived every attempt. Years later, he begins to battle the Male M.U.T.O., leaving all of Honolulu to be devastated and than later he heads to San Francisco. In the final battle, he battles the M.U.T.O.s. He hits the Male M.U.T.O. with his tail impaling him and than when the Female M.U.T.O. attempts to kill Ford Brody, Godzilla opens her mouth firing his atomic breath down to her throat and beheading her, saving Ford's life. Than Godzilla falls asleep until the next morning, where he departs home in peace and the news subtitle is: King of the Monsters-Savior of our City?.

It is also possible that he will be once again one of the main characters in Godzilla: King of the Monsters and Godzilla vs. Kong. 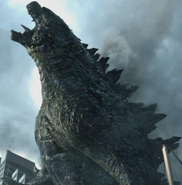 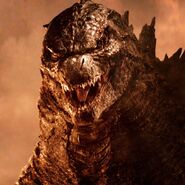 Add a photo to this gallery
Retrieved from "https://kaijufanon.fandom.com/wiki/Godzilla_(MonsterVerse)?oldid=40420"
Community content is available under CC-BY-SA unless otherwise noted.