Godzilla (Kiryu Saga) is the incarnation of Godzilla that appeared in Godzilla Against Mechagodzilla and Godzilla: Tokyo S.O.S..

The Kiryu Godzilla is a giant prehistoric amphibious creature with white fire-looking maple leaf-shaped dorsal plates on his back, slightly long arms, chubby legs, and a slightly long tail.

This Godzilla is more of a force of nature who thinks that mankind is a pest. Yet, he also becomes aggressive when provoked or messed with.

Role in his Films[edit | edit source]

After the First Godzilla's defeat in 1954, in the fearful night in 1999, another Godzilla rose from the slimy depths and begins rampaging through Japan. Mankind's weapons tried to stop the beast, but failed. The beast later returned to the sea. The decomposed corpse of the First Godzilla is built into a robot named Kiryu. Than later, the beast begins to battle Kiryu. Than his roar causes Kiryu to be possessed by the spirit of the First Godzilla and Kiryu goes berserk and goes on a rampage. Later, he battles Kiryu again than he and Kiryu flew into the sea. Than he got scarred on the chest. A year later, the beast wakes up than rampages through Tokyo. Hopefully for Japan, Mothra and Kiryu begin battling the beast. Than Mothra Twins begin battling the beast also. Than Godzilla kills Mothra, causing her twins to get mad. Kiryu and Mothra Twins begin battling the beast and the Mothra Twins begin shooting silk webs all over the beast wrapping and webbing him. Than Kiryu takes the beast back to sea. Godzilla's bones are returned to the sea. 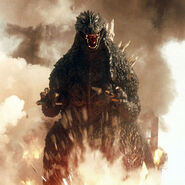 Add a photo to this gallery
Retrieved from "https://kaijufanon.fandom.com/wiki/Godzilla_(Kiryu_Saga)?oldid=31380"
Community content is available under CC-BY-SA unless otherwise noted.