Godzilla (Heisei) is the third incarnation of Godzilla. He is the main Kaiju of the second Godzilla series known as the Heisei Series. He first appeared in The Return of Godzilla/Godzilla 1984 and last appeared in Godzilla vs. Destoroyah.

He as a blackish grey scaly skinned giant Godzillasaurus with dorsal plates on his back, chubby legs with four toes, slightly long arms, and a slightly long tail.

He is somewhat a hero/anti-hero. He becomes aggressive when provoked or messed with.

He first appeared when he attacks a Japanese fishing vessel known as the Yahata Maru while it's trying to find it's way to shore in a fierce storm. A giant Sea Louse named Shockirus jumps off of his body and onto the boat killing all but one known as Hiroshi Okumura. Than he attacks several times. Than he attacks Japan and battles Super X, then he falls into the Volcano's Crater. Later, he battles Biollante, than later King Ghidorah then Mecha-King Ghidorah, Mothra and Battra, Rodan, Mechagodzilla 2/Super Mechagodzilla, he adopts his second son known as Godzilla Junior. Than he teams up with M.O.G.U.E.R.A. to battle Spacegodzilla, than he becomes Burning Godzilla and battles his final foe known as Destoroyah. Than he melts down and dies. Than his second son, Godzilla Junior, will be the new Godzilla. 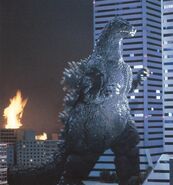 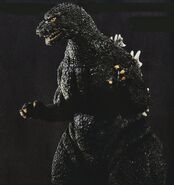 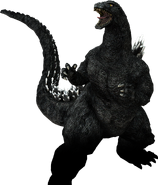 Add a photo to this gallery
Retrieved from "https://kaijufanon.fandom.com/wiki/Godzilla_(Heisei)?oldid=44737"
Community content is available under CC-BY-SA unless otherwise noted.