The Final Wars Godzilla is a giant prehistoric amphibious reptile with maple leaf-shaped dorsal plates on his back, long arms, big legs, and a slightly long tail.

Pretty much like Godzilla (Showa), Godzilla (Heisei), Godzilla (2000: Millenium), and Godzilla (Vs Megaguirus), he has much more heroic qualities than being a creature who sometimes become aggressive when provoked or messed with.

Role in his films[edit | edit source]

Godzilla first appears in 1954. He begins rampaging worldwide. Than in the Antarctic, the original Gotengo battles the Monster and lock him up in his icy prison, ending his reign of terror. Years later, the new Gotengo comes to wake up Godzilla to battle the other monsters who were attacking cities worldwide. When he is finally awakened from his icy prison, he battles Gigan in the South Pole, Zilla in Sydney, Kumonga in New Guinea, Kamacuras when he finally comes ashore at Mt. Fuji. Later, he fights Anguirus, Rodan, and King Caesar at Mt. Fuji. Later, he finally arrives in Tokyo, first fighting Ebirah and Hedorah and fires his atomic breath at Planet Gorath. He then battles Monster X and Godzilla, Mothra, Monster X, and Gigan level the ruins of Tokyo. After Gigan's defeat in his battle with Mothra, Godzilla battles Monster X. After the Xiliens are destroyed, Godzilla battles Keizer Ghidorah. Keizer Ghidorah almost kills Godzilla, but the humans use the supernatural means to help him gain the upper hand. Godzilla fights back, blasting off two of the evil Kaiju's heads and tossing the evil Kaiju around. Godzilla than throws the evil Kaiju into the air and fires his Red Spiral Heat Ray at him, destroying him for good. Godzilla continues chasing the humans on the Gotengo. Than his son comes and calms him down from his anger towards mankind for awakening and irradiating him. Godzilla finally forgives mankind and he and his son leave Tokyo peacefully and depart home and Godzilla lets out his final roar through the screen as the King of the Monsters. 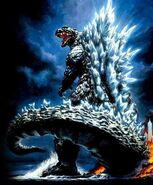 Retrieved from "https://kaijufanon.fandom.com/wiki/Godzilla_(Final_Wars)?oldid=37611"
Community content is available under CC-BY-SA unless otherwise noted.