Godzilla, King of the Monsters![]

It started with a Japanese fishing vessel called the Eikou Maru sailing over the sea, until some strange attack out of nowhere began sinking and destroying it, another ship called the Bingo Maru was sent to investigate the incident, but meets the same fate, an American reporter named Steve Martin arrives in Japan to visit his college friend, Dr. Serizawa. In a Japanese island called Odo Island, a few survivors make it ashore, then when they make their first visit on the island, the natives told them that the ship disasters are the work of their sea god, Godzilla. Then later, they spend the night in the village, then the night became stormy, and the unseen monster invades the island. Then later, they bought some of the natives back to Tokyo, then on the next day, the research party travel to the island, then Godzilla shows up and roars to the island's natives and visitors and then returns to the sea, then they saw how big his footprints are, then back in Tokyo, Dr. Yamane describes ancient land and sea reptiles, and it is discovered that Godzilla is a dinosaur-like hybrid of land and sea reptiles and his origin was revealed to the public, then later, a fleet of warships began searching to kill the monster, then it emerges from the sea, then later that night, it was a seemly peaceful night in Tokyo, then suddenly, Godzilla appears from the depths of the harbor in front of a partying cruise ship, causing the passengers to scream and run in terror, then later on that fearful night, Godzilla begins his first attack by attacking Shinagawa and then returns to the sea, then later on the next night, Godzilla begins his second attack by attacking and destroying Tokyo, causing the deaths and injuries of countless people, then on the next day, the hospitals are overflowing with the injured and the dead, then later, Emiko warned Serizawa that he must use the secret weapon against Godzilla, then later on the next day, they take a boat to find the location of Godzilla and Serizawa and Ogata dive into the water, but Ogata resurfaces, and Serizawa activates the Oxygen Destroyer to sacrifice himself and kill the beast, ending his reign of terror, many celebrate Godzilla's death, but mourn Serizawa's, but the whole world would wake up and live again.

Two pilots named Shoichi Tsukioka and Koji Kobayashi went hunting for schools of fish for a tuna cannery company in Osaka, then Kobayashi's plane malfunctions and is forced to land near Iwato Island, then Tsukioka comes to pick up his partner and they spot two monsters, one known as Godzilla (AKA Gigantis), the other known as Anguirus, and they fight and fall into the water, then the two pilots report this to the authorities in Osaka, and they find out that the one called Anguirus is a mutated Ankylosaurus, Dr. Yamane, who experienced the first Godzilla's attack in 1954 has confirmed that Gigantis is the same species as the one that attacked Tokyo in 1954, and that both monsters are awakened by nuclear testing and suggested using flares to lure Gigantis away, then one night, Gigantis arrives in Osaka, and all of the cities lights are turned off, and the military used flares to lure the monster away from the shore, and the monster pursues the flares leaving the shore. Meanwhile, a prison truck transports a group of dangerous criminals, then the prisoners beat up the two policemen guarding the backdoor and escape and the policemen go after the escapees, and some of them hijack a truck and crash it into an industrial building, causing a massive fire which catches the attention of the monster, then some of them head to the subway, then the subway got flooded and they drowned, then Gigantis destroys Osaka and fights Anguirus, then Gigantis kills Anguirus and heads back to sea, then the next day finds Osaka in ruins, then later, during a company party, Tsukioka and Kobayashi are notified that Gigantis has destroyed one of the company's fishing vessels, then Tsukioka and the military began a massive search for Gigantis, then spots him swimming to shore on a small, icy island. He notifies the cannery and his partner Kobayashi takes off in his plane and switch shifts with him and he travels on a jet with an old friend, and they drop bombs on Gigantis, but easily failed, then Kobayashi tries to distract the beast from returning to the sea, but is killed, much to Tsukioka's sadness, but Tsukioka realizes that the military can shoot missiles at the mountain to bury Gigantis, then the fighter jets buries Gigantis in snow and ice, keeping him prisoner in an iceberg.

Godzilla escapes from his icy prison and attacks Mount Fuji, then they bring King Kong from Faro Island to Japan to fight Godzilla, then King Kong escapes and heads to Japan and begins his first battle with Godzilla, then enters Tokyo and captures a girl named Fumiko and goes on top of the Diet Building, then gets put to sleep and lets go of the girl, then gets transferred to Mount Fuji, where Godzilla is, and fights him there, then the two monsters fall into the sea, then King Kong defeats Godzilla and swims home.

Godzilla was awakened by nuclear testing in 1956 and ravages Japan and battles the Avengers and other monsters in the modern day.

Godzilla and his son, Godzooky team up with the Calico crew to defend the world from multiple threats.

Godzilla, King of the Monsters 3D[]

Godzilla goes on a rampage in San Francisco finding his son, but when he finds out that his son died from destroying a nuclear submarine, he goes berserk and attacks the city.

Godzilla is reborn, when a volcano in Mount Mihara erupts and he attacks a Japanese fishing vessel called the Yamata Maru, and a mutant sea louse called Shockirus jumps off his body,boards the boat and attacks the crew, leaving only one survivor, then later, he attacks and destroys a Soviet submarine, then later, he attacks a nuclear power plant then follows a flock of birds back to sea, then he attacks Tokyo and battles Super X, then he gets lured back to Mount Mihara and gets reimprisoned in the volcano where he reawakened.

Godzilla retains the appearance and behavior of his Heisei incarnation and defends the world from multiple threats.

Godzilla is an artificially-created creature and fights a giant, bat-like monster called the Gryphon.

Following a nuclear test in French Polynesia, an unseen creature attacks a Japanese fishing vessel, leaving only one survivor who claims that he saw "Godzilla", then Nick and his team do a research on the creature and then later, the creature sinks more ships and then later, the creature invades New York, causing everyone to be evacuated, it also nests the city, then it battles the U.S. army, then it jumps back into the Hudson River, only to battle the nuclear submarines and get seemly killed by one missile, then the team finds the nest and the babies hatch and attacks the team, then they call the army to blow up the building, then the fighter jets came and blew up the building with the nest in it, killing most of the babies, after most of the babies were killed, the parent Godzilla reemerges only to find its young dead and angrily chases the team and the team lure the monster to the Brooklyn Bridge where it would be killed by the army, and the fighter jets finally killed the creature, ending its threat forever, after the creature was killed, one remaining egg hatches and the hatchling would become another Godzilla that would terrorize the world another day.

A second Godzilla hatches and teams up with H.E.A.T. to protect the world from multiple threats.

Godzilla teams up with and battles some of his old friends and foes in a different continuity which connects to the events of the original 1954 film.

Godzilla has fed on radiation and has evolved over the centuries and fights two monsters called Shinomura.

Godzilla was awakened by a Russian military submarine incident in 1954, the United States and Russia use nuclear weapons to try to kill the creature, then in 1999, Joseph Brody loses his wife in the Janjira incident, and gets arrested, then in 2014, Joseph was released, then later Ford and Joseph travel to Japan and then gets arrested for trespassing, then later that night, the male M.U.T.O. emerges and Joseph dies in the incident, then later in Hawaii, Godzilla shows up and fights the male M.U.T.O. and then follows it to San Francisco, then the female M.U.T.O. emerges and attacks Las Vegas, then the two M.U.T.O.s reunite, and Godzilla battles the M.U.T.O.s in San Francisco, and Ford destroys the M.U.T.O.'s eggs, angering them, then Godzilla defeats the male M.U.T.O. with his tail by impaling him and then defeats the female one by opening her mouth and firing his atomic breath down her throat and beheading her and he roars victoriously and then falls asleep, then in the next morning, Godzilla wakes up and leaves the city peacefully, without causing any harm.

Following the events of the 2014 film, Mothra, dubbed Titanus Mothra is discovered by Emma Russell and her daughter, Madison Russell, then they got captured by Alan Jonah and his soldiers, and got taken to Antarctica, where King Ghidorah is imprisoned, then when Ghidorah was freed from his million year imprisonment, he battles Godzilla, and Mark Russell comes to rescue his wife and his daughter, but failed, then in headquarters they talk about making Godzilla their pet, but Serizawa replies the other way around, then in Mexico, Rodan, dubbed Titanus Rodan emerges and goes on a rampage, then Godzilla battles Ghidorah in the Gulf of Mexico and severs one of his heads, then they use to Oxygen Destroyer to kill Godzilla, then Ghidorah regrows one of his heads, then later, he awakens the Titans with his roar, then later he attacks Boston, then Mothra finally makes it to her adult form and fights Rodan, then Serizawa sacrifices himself to revive Godzilla, then Godzilla fights Ghidorah and Mothra fights Rodan in Boston, then Emma uses ORCA to lure Ghidorah, then Godzilla becomes Burning Godzilla and finally defeats King Ghidorah and eats his remains, then most of Boston is now in ruins, and all of the other Titans bow down to their king, Godzilla. 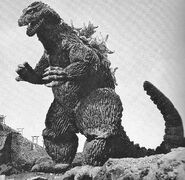 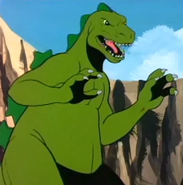 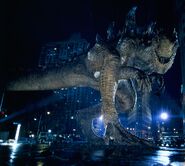 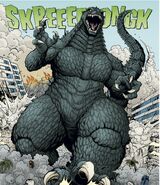