Kaiju Wiki
Register
Don't have an account?
Sign In
Advertisement
in: Godzilla, Godzilla king of monsters, Kaiju,
and 17 more

Godzilla (2000:Millennium) is the incarnation of Godzilla that appeared in Godzilla 2000: Millennium.

He is a blackish grey and green scaly skinned giant prehistoric amphibious reptile with fire-looking dorsal plates in his back and big legs and slightly long arms and a slightly long tail.

He has a much more heroic/anti-heroic side than a villainous side. He sometimes becomes aggressive when provoked or messed with.

Role in his film[]

Following the First Godzilla's attack in 1954, a new Godzilla begins rampaging on Numero, destroying everything in his path. Later he rises out of the sea to battle first the army then a UFO (that would later become a Millennian then Orga). Later in Tokyo, he approaches the bay and into Tokyo to battle the UFO once again. He gets roped while battling the UFO. Than one Millennian appears then becomes Orga to fight Godzilla. Godzilla and Orga fight withGodzilla gaining the upper hand. Then Godzilla battles Orga in his final form, swallowing the Monster King. Godzilla uses his Nuclear Pulse to destroy Orga. The Space Kaiju is destroyed. Then he approaches the humans and kills the bad guy, Katagiri. Later he starts a rampage, with him turning much of Tokyo into a sea of fire. 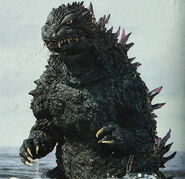 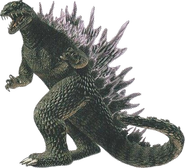 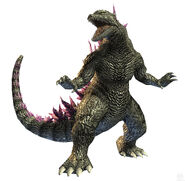