Godzilla (1954) is the first incarnation of Godzilla. He is the First Godzilla who wreaked havoc in Tokyo in 1954. He first appeared in the original 1954 Godzilla film, Godzilla.

Godzilla 1954 resembles a giant prehistoric amphibious reptile with a head that looks like a Tyrannosaurus Rex, dorsal plates that are shaped like maple, arms and legs that slightly look like an Iguanadon, and a slightly long tail.

This Godzilla as a neutral creature who becomes aggressive when provoked or messed with. Also, he is outraged with the world for awakening and irradiating him.

Role In The Film[edit | edit source]

A Nuclear H Bomb testing in the Pacific Ocean awakens and irradiates a prehistoric amphibious reptilian monster known as Godzilla. Years later, the monster begins sinking several ships. The Odo Island natives claim that the sinking ships are the works of their sea god, Godzilla. Than on one fearsome stormy night on Odo Island, the monster begins taking refuge on Odo Island. When the people went to Odo Island, they finally got the sighting of the monster. He leaves Odo Island and later that night in Tokyo, he swims through Tokyo Harbor. He then comes ashore to attack Shinagawa and later returns to the sea. The other fearsome night, Godzilla again comes ashore, breaks through the electric fences, and attacks and destroys Tokyo. When Godzilla's rampage is about ready to end, the fighter jets start to make Godzilla Flee. Days later, Daisuke Serizawa activates the Oxygen Destroyer. The Oxygen Destroyer kills both Godzilla and Daisuke Serizawa, ending Godzilla's reign of terror once and for all. 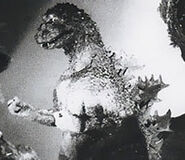 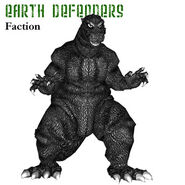 Retrieved from "https://kaijufanon.fandom.com/wiki/Godzilla_(1954)?oldid=31742"
Community content is available under CC-BY-SA unless otherwise noted.