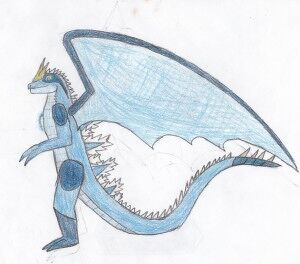 His common appearance is a blue gojirin with orange-gold eyes, a three pointed golden crest, blue wings, has ivory colored spinal plates, darker blue marking on each of his eyes, his shoulders, hips, feet and the tip of his tail, and a glowing blue jewel in the middle of his chest.

Bendorah joined the Earth Defenders, protected the Earth from numerous threats and hostile kaiju. He vowed to protect what is right, fight for the weak and defeat any kaiju that poses as a threat. His goal is to earn the title as the “Ultimate Guardian.”

Retrieved from "https://kaijufanon.fandom.com/wiki/Bendorah?oldid=52283"
Community content is available under CC-BY-SA unless otherwise noted.