Bagan was originally supposed to appear in The Return of Godzilla, but was later scrapped. He was also supposed to appear in a film called Mothra vs Bagan, but was replaced with Godzilla instead. The monster was also replaced with Destoroyah in Godzilla vs Destoroyah. Bagan only appeared in Super Godzilla and in Godzilla Movie Studio Tour CD-Rom. Bagan was rumored to be in cut footage of Godzilla: Final Wars, but the footage was of a kaiju called Reizaus, though it is possible that elements of Bagan were included in the making of the monster. The footage can be found here.

In Super Godzilla, Bagan is a monsterous figure who's ancient slumber was interrupted by aliens. They inject a serum of Godzilla's and King Ghidorah's cells, making him a worthy foe for Godzilla, but the King of the Monsters transforms into Super Godzilla and manages to kill off Bagan.

Bagan was included in the early draft of The Return of Godzilla, in which Bagan would have looked totally different from his video game

counterpart. Bagan was apparently a combination of 3 different creatures: Enjin Reijuu, Mizu Reijuu, and Doragon Reijuu. They would eventually come together and form Bagan. In the original draft of the movie, Godzilla would've actually fought another monster. In Resurrection of Godzilla , Bagan's orginal name is Bakan.

It would have been possible if Bagan could have also have transformed from Dogolas, since the closely resemble each other in color and also have some features that make it look like a larva form of Bagan.

Bagan, as stated in the top of the article, was rumored to be in Final Wars. However, he actually never appeared in Final Wars. The video was footage used from Super Fleet Sazer-X, which aired in 2005. 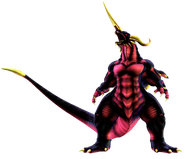 Bagan as Model MMD By Toho